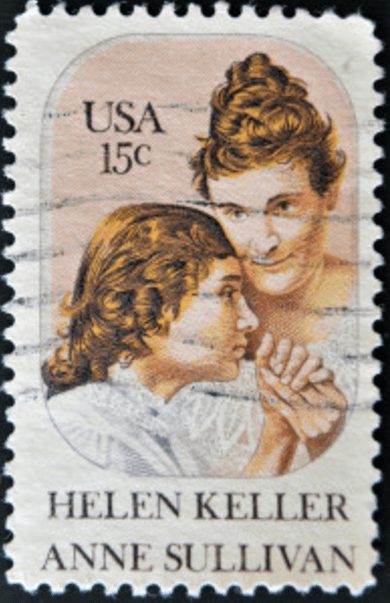 As we celebrate Women’s History Month, it’s important to remember the important women in American history, especially those women who are often overlooked and forgotten. One woman who comes to mind is Anne Sullivan, who is best known as the teacher and lifelong friend of Helen Keller. Here at Lighthouse Translations, we truly admire Sullivan as an instructor and for her contribution to language. We simply wish more people knew the details of her life.

Sullivan’s parents came to the United States from Ireland in the 1840s to escape the Great Famine, ultimately settling in Massachusetts. They had five children but only three survived infancy, including Annie, who was born in 1866. What many people may not know is that Sullivan herself was virtually blind after suffering from a bacterial eye disease known as trachoma when she was eight years old. Soon after, her mother died, and two years later her father abandoned his children, fearing he wasn’t fit to care for them. Annie and her younger brother, Jimmie, were sent to live at the Tewksbury Almshouse, a home for the poor that was dirty and overcrowded. A few months after Annie and her brother arrived, Jimmie died, leaving Annie without any family.

As a way to escape the poor conditions of the Tewksbury Almshouse, Sullivan set her focus on education and found a way to enroll in the Perkins School for the Blind in Boston. Despite a rocky start to her time there, Sullivan ultimately graduated as the school’s valedictorian when she was 20 years old. During her time there, Sullivan underwent several operations on her eyes that helped to improve her vision significantly after spending most of her adolescence blind. More importantly, while at the Perkins School, she befriended Laura Bridgman, who like Helen Keller was both deaf and blind but managed to understand language. Sullivan learned a great deal from Bridgman, and the relationship between the two undoubtedly played a role in the work Sullivan would go on to do with Keller.

In March 1887, less than a year after graduating from the Perkins School, Sullivan moved to Alabama to become the teacher of the then seven-year-old Keller. Sullivan altered her teaching style to fit Keller, and within six months Keller had learned Braille, nearly 600 words, and even some multiplication. The following year, Sullivan accompanied Keller to Boston while she attended the Perkins School. While there, Keller made incredible progress, making her famous in large part because of Sullivan was able to teach her. Of course, that was just the beginning for Keller. She accomplished some incredible things in her life, many of them with Sullivan by her side, as the strong teacher-student relationship the two formed evolved into a close, life-long friendship. In fact, Keller herself summed up Sullivan’s impact on her best when she said, “The most important day I remember in all my life is the one on which my teacher, Anne Mansfield Sullivan, came to me.”