San Juan, Puerto Rico – October 2010- Lighthouse Translations and Interpretation Services had the opportunity to participate in this long-awaited event, organized by the Puerto Rico Kabbalah Group, by providing simultaneous Spanish translation /Puerto Rico translator and equipment services. The group contacted us several weeks prior to the event and we quickly were able to work with the group to ensure that this event would turn out to be something special. We provided both the simultaneous translation equipment as well as the Puerto Rico translator/interpreter.

Rabbi Yehuda Berg’s first visit to Puerto Rico was in front of a 700+ audience at the Puerto Rico Convention Center.  His speech was simultaneously translated from English into Spanish.  Yehuda’s visit coincided with the recent release of his book The Power to Change Everything, into Spanish. 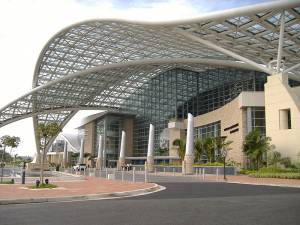 Our local Puerto Rico translator (interpreter) was able to prepare ahead of time by reading the English and Spanish version of the Power to Change Everything.

We were very fortunate to have several audience members share their comments with us when they were returning their headsets. They were very impressed with the quality of the translation of the Puerto Rico translator and felt as if it had been given in Spanish and not in English. For many audience members, this was their first experience with simultaneous translation and they were left with a very positive impression of it.

For more information about Yehuda Berg, you can visit www. yehudaberg.co.